Autism researchers believe there is a strong link between the functioning of the brain and the gut. They claim that several types of diets and probiotics can help treat children with autism.

With the very large number of foods and recommended diets out there, how can you determine what works best for all family members with autism?

In this article, we discuss various theories as well as the effectiveness of diets and probiotics, the so-called “friendly bacteria,” in helping ease the symptoms of autism. Let’s look at the relation between probiotics and autism.

Best Probiotics for Autism
What are probiotics?
Autism, Probiotics and Digestive Health
The Autism-Gut-Brain Connection
What causes gastrointestinal problems in people with autism?
Leaky gut syndrome
Best probiotic strains for autism
The importance of Lactobacillus reuteri in autism
The B. fragilis strain and autism
Antibiotics vs. Probiotics
Is it safe for kids to take probiotics?
Disadvantages or side effects of probiotics

Probiotics can be found in foods such as yogurt, kefir, sauerkraut, kimchi, and miso, and are readily available in dietary supplements.

A study of children with autism spectrum disorders showed an elevated number of pathogenic bacteria called Clostridia which are known to cause GI problems.

A separate 2017 study at The Ohio State University Wexner Medical Center’s Nisonger Center showed children with ASD have a low amount of healthy species of bacteria called Faecalibacterium prausnitzii, which is associated with a healthy digestive system.

To achieve a healthy digestive tract, the thousands of strains of beneficial bacteria (like Faecalibacterium prausnitzii) should live in balance with the “bad bacteria.”

Experts suggest that diet may alleviate this problem. Research has shown that probiotic microbes have positive effects on the digestive and gastrointestinal health of both adults and children. Probiotic supplements and food products may treat autism and attention deficit hyperactivity disorder (ADHD) for children with ASD.

For years scientists have acknowledged that many disorders, illnesses, and diseases are likely linked to the gut-brain connection.

According to The US Department of Health (DOH) and the National Institutes of Health (NIH), the postnatal development of a child depends on the health of his/her gut microbiota, which is defined as the community of microorganisms (bacteria, fungi, and viruses).

Researchers suspect an imbalance of healthy and unhealthy bacteria in the digestive tract might be contributing to symptoms of autism spectrum disorder.

The gut-brain connection, autism, and the use of probiotics are being further studied at Arizona State University Biodesign Institute and the Texas Children’s Hospital Microbiome Center. There is evidence of a link between the chemicals produced by bacteria in the digestive tract and the behavior of kids with autism.

Another notable evidence-based finding presented in the 2016 International Meeting for Autism Research (IMFAR) showed the presence of the bacterium Haemophilus parainfluenzae in the stool of a child with autism during a three-day clinical trial period in which the child experienced diarrhea, GI pain, and several challenging behaviors, including self-injury.

What causes gastrointestinal problems in people with autism?

Researchers found that children with autism have elevated levels of dendritic cells. These cells are the ‘generals’ of the immune system. Ashwood said the dendritic cells serve a key role in the body’s immune response to microorganisms, including disease-causing germs and normal digestive bacteria.

Leaky gut syndrome occurs when gaps in the intestinal wall cause bacterial metabolites to enter the bloodstream. It is considered a risk factor for children with autism who have GI symptoms.

Leaky gut symptoms may include:

Since the majority of children with ASD suffer from gastrointestinal issues and some form of IBS, it is recommended they consume foods with soluble fibers to effectively reduce their symptoms or treat them completely.

Two of the most recommended probiotic strains for autism and IBS are Lactobacillus reuteri and Bifidobacterium. These can be useful tools in addition to incorporating whole probiotic-rich foods into your child’s diet.

Over the past decade, studies of specific probiotic strains have been made to confirm the gut-brain theory and identify whether these strains are effective and safe for treating symptoms of autism. 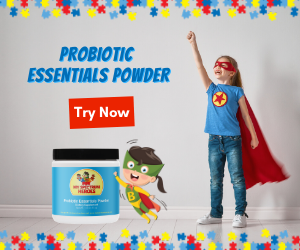 The importance of Lactobacillus reuteri in autism

While most probiotics improve gut problems, Lactobacillus reuteri has been observed also to improve social behavior in autism.

A study conducted by Mauro Costa-Mattioli of Baylor College of Medicine in Houston, Texas revealed that social behavior among experiment mice normalized and was similar to those of control mice after taking L. reuteri. This is because this specific strain increases oxytocin, also referred to as the “love hormone.”

As such, kids with autism who have this strain on their gut microbiome may experience improved moods and social interactions, making it beneficial for many people with ASD and other behavioral and autism-like symptoms.

The B. fragilis strain and autism

Bacteroides fragilis, also known as B. fragilis, may be helpful to children with autism, according to a study conducted in California Institute of Technology in Pasadena. The study discovered that B. fragilis has a unique ability to penetrate even the most hostile mucus layers and embed itself into the intestine’s cells.

It is important to note, however, that B. fragilis is not commercially available, and more studies need to be conducted before it can be offered to the public as treatment.

Another factor to consider when trying to improve GI symptoms is the intake of antibiotics. Antibiotics are taken to prevent harmful bacterial growth, but they also eliminate beneficial gut bacteria.

Some evidence suggests taking probiotics during or after taking antibiotics may help counter the negative effects of antibiotics, while a different study states the opposite.

If you are wary about taking probiotics and antibiotics together, you can consider fermented products like yogurt and curd-based food to bring balance back to the gut bacteria.

Is it safe for kids to take probiotics?

Probiotics are not regulated by the US Food and Drug Administration (FDA) because they are regulated as a food product.

Doctors and health experts agree probiotics are generally safe for both children and adults. However, children with weak immune systems or serious illnesses may not be able to take probiotics due to possible harmful effects.

The amount and composition of live bacteria present in probiotic food products should also be considered. Parents should always consult a child’s doctor before starting probiotic supplements.

Disadvantages or side effects of probiotics

While considered safe, there may be some side effects to ingesting live microorganisms.  Side effects may include:

Individuals with a weak immune system, are seriously ill, and/or suffering from certain bowel problems are advised to seek a doctors’ approval before consuming probiotics. The live microorganisms are also not suited for infants, young children, and pregnant women.

Never give probiotics to premature infants. For patients with bloody stools, post-cardiac surgery patients, and patients with pancreatic dysfunction, should be authorized by their physicians.

It can be challenging for families to manage a child’s health. Autism can be very complex, and there are multiple factors that contribute to its symptoms.

However, the various advancements in medical research resulting in the discovery of probiotics for autism and improved knowledge on the functioning and purpose of the microbiome in the body, among other findings, are positive steps for complete and effective treatments.

Autism Parenting Magazine tries to deliver honest, unbiased reviews, resources, and advice, but please note that due to the variety of capabilities of people on the spectrum, information cannot be guaranteed by the magazine or Its writers. Medical content, including but not limited to text, graphics, images, and other material contained within is never intended to be a substitute for professional medical advice, diagnosis, or treatment. Always seek the advice of a physician and never disregard professional medical advice or delay in seeking it because of something you have read within.

Amy KD Tobik, A former Editor of Autism Parenting Magazine, an award-winning monthly international publication. She coordinates and manages an extensive group of doctors, autism specialists, and writers to create the most up-to-date news and professional guidance for families affected by autism. Magazine readers are from 30 countries, with the majority coming from the US and other English-speaking countries. A graduate of Sweet Briar College in Virginia, Amy's experience includes more than 30 years writing/editing newspapers, monthly magazines, technical documents/manuals, books, and websites. She and her husband have two adult daughters and live in the Carolinas.