Developing Life Skills With Autism-One Pizza Order at a Time

Friday night was pizza night. This tradition began when Dylan was in middle school and the increased social pressures and new academic pressures conspired to totally “unglue” him. By Friday, he was an exhausted wreck, and frankly, so was I. Middle school is difficult for most children. It was close to unbearable for Dylan.  It is a big transition in every way—physical, emotional, social, and academic. Children are expected to increase their independence while decreasing how much they lean on (or into) the adults around them. By the time the bell rang to dismiss school on Friday, Dylan was fried. 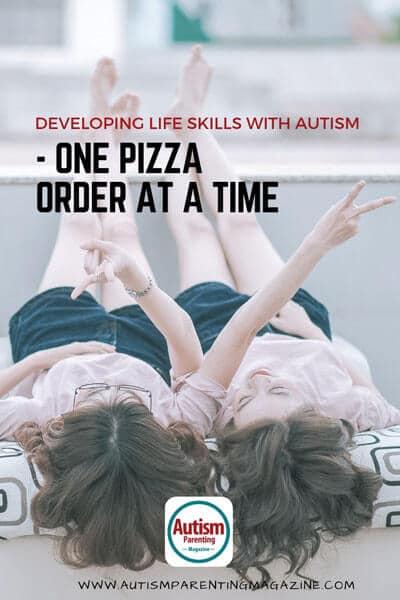 Another unpleasant, but obvious truth of the matter was that he had very few social invitations or social events on Fridays (virtually none). This seemed particularly painful to him, as his classmates and his “friends” would spend much of the week making Friday plans. He was not upset about his lack of friend-related activities on Saturdays and Sundays, but he really felt the sting of his lack of Friday activities. So I decided that Friday night would be pizza and video night.

Of course, this could not just be “wasted” time, as the clock continued to tick and the holes in Dylan’s development seemed to be growing wider, not narrower.  So, I embarked on a plan that would teach Dylan, and his younger sister, Laura, how to order a pizza, walk into the pizza place and pick up the order.

Ordering a pizza required looking up a phone number and knowing what to say and how to respond. It also required a consensus as to exactly what was being ordered before the number was dialed. This was much more thorny for Dylan than I had anticipated. Laura could always be counted on to “up the ante” for Dylan, and usually in a good kind of way.  Eventually, she would scout for coupons and want to try something more exotic than a plain pizza. Dylan was very food motivated, but for the kind of food HE wanted and the way HE wanted it prepared and presented. Pizza slices needed to be square, not triangular. Cheese needed to be melted, but not brown.

Corner pieces were unacceptable because they were too crusty and therefore too crunchy.  Any deviation from these demands was unacceptable, sometimes setting the stage for a complete meltdown. Laura, on the other hand, was adventurous with food in every way; taste, texture, variety, presentation, and country of origin.   She was really okay with trying something, not liking it and eating a bowl of cereal instead. Dylan would sometimes bleat for hours, like an injured goat, if the food was not to his liking and he had to switch gears and eat something else like a bowl of cereal or a sandwich.


Reaching consensus on what to order was often like getting congress to compromise. Dylan, for a long time, was intractable on every line item.  Laura has always been very loving and custodial over Dylan.  Historically, she has given in…a lot. She was usually ready and willing to acquiesce to him, realizing how hard most things were for him.  She understood, at a deep level, that he truly became distraught when things were switched up, or his internal rules were violated. He was not just being non-compliant, or selfish; he was experiencing bona fide panic.

I would have to stand there and say to her, “Laura, what do YOU want? It doesn’t matter what Dylan wants, what would YOU like?” I learned a very big lesson, very quickly. It was more important for Laura to “take care of” Dylan and keep his world predictable than it was for her to get what she wanted.

In essence, I was making her choose between getting a special treat or betraying Dylan and causing him pain. One time I pushed hard and insisted that she get what SHE wanted,  a round pizza with mushrooms, they were both miserable. I felt like a monster; Laura’s heart was broken and Dylan was inconsolable. That was a hard lesson and one I would never forget.

Money was very tight, so ordering two or more separate meals would not only be impractical but would also defeat one of the main purposes of Friday night takeout, learning to compromise and understand the perspectives of others. So, I altered my original strategy and began a slower, more scaffolded approach.  One aspect of the order would be different each time. It sounds surprising, even crazy, but for a long time, just seeing a pizza that was half his beloved cheese and half something different, was very upsetting to Dylan.

Although he was not required or expected to eat the “new” thing, just having it look different and knowing that there would be less for him to eat potentially, was very disturbing to him. However, slowly, deliberately and with great determination, we eventually got to a place that almost resembled “normal” with regard to our Friday night routine.

For a long time, I scripted Dylan’s orders. We needed to begin at “Hello, I would like to place an order for pick up.”  The noise in the background and the fast pace of the person’s voice on the other end of the phone completely derailed Dylan at first.  We needed to role play and script for unexpected circumstances, like being asked if he wanted to try the special or add a liter of soda to his order.  Eventually, we arrived at a place where he could field an unexpected question on his own, or I could stress the system and ask, “What are the specials tonight?” and we could change our order on the fly!  The first time that happened, it felt like magic. I called up a friend later that night and excitedly recounted the pizza order conversation. Having a child with autism herself, she understood and was thrilled for us.

We always ordered pick up so that Dylan could become comfortable with the process of picking up takeout food. Even though he had accompanied me many times, we needed to work on individual skills from entering with awareness of others (not knocking them over or closing a door in their face) to standing in the right place to announce yourself and identify your order, to checking the order, to transacting money, to exiting successfully with your order. So many, many skills are required that it is mind-boggling.

As is the case with many individuals with autism, Dylan could usually accurately tell you what the correct steps were, and in the correct order. However, actually being able to execute the skill(s) in an authentic environment with real people was a whole different ball of wax. The real world is often unpredictable and confusing. Anxiety goes up, and the ability to navigate seemingly routine situations goes down. That happened a lot.

I think for Dylan the hardest part was transacting the money, with figuring out how to carry the order coming in a close second place in terms of difficulty. Even though he will tell you that math is his least favorite subject, Dylan can do basic calculations in his head with amazing accuracy. So, knowing how much change he was due was not a problem, however the physical act of gathering it in his hands and attempting to put it in his pockets proved to be problematic.

To this day his fine motor skills leave much to be desired, so an awkward middle school Dylan really struggled. For some reason, which I still have not completely figured out, he would not put money in his pockets, but instead, he would set any bills or coins on top of the pizza box or try to carry it in one of his hands while he carried the pizza in the other.

The good news is that he eventually mastered the whole procedure, and by the time he was a senior in high school, Dylan could be counted on to order the pizza easily and drive to pick it up…independently!  The struggle and determination were worth the end result.

Anderson, L. M., & Emmons, P. G. (2004). Unlocking the mysteries of sensory dysfunction: A resource for anyone who works with or lives with, a child with sensory issues. Arlington, TX: Future Horizons.

18
SHARES
Share on FacebookShare on TwitterShare on Pinterest
We use cookies on our website to customize our marketing and give you the most relevant experience by remembering your preferences and repeat visits. By clicking “Accept”, you consent to the use of ALL the cookies. However you may visit Cookie Settings to provide a controlled consent.
Cookie settingsACCEPT
Manage consent