Punch cornflour, and you’ll bruise yourself. If you jump on it, it’ll take your weight. Stand still, and you sink. Run your fingers through it gently, it wraps around you like liquid. Like my cornflour boy, the more force you apply, the more resistance you meet. To find its softness and fluidity, move slowly, go gently. 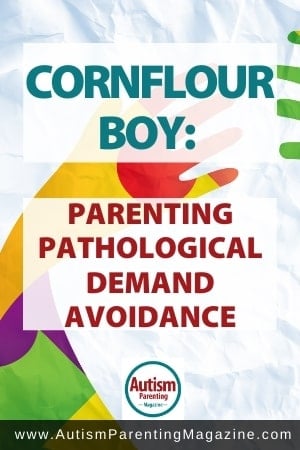 I’m not a newbie to the spectrum. I worked with teenagers in care with autism spectrum disorder (ASD) for 10 years before having my own children and my youngest was diagnosed with typical autism at eight, but I’d never met pathological demand avoidance (PDA) before. I had a toolbox full of strategies, interventions, and experience and I still had no idea how to deal with my cornflour boy, my eldest.

The thing that doesn’t work with PDA is strategies, and the thing that got in the way of parenting him most was my experience. I know autism, I know asperger’s, and he didn’t fit the profile, but there was something. He didn’t add up, and he almost broke me. But then, when I was at my most desperate and empty, I’d look at him and find that same desperation in him. “I don’t like it,” he’d say, looking at his favourite food, hungry, and I’d see in his eyes that he was just as stuck and lost and desperate as me. He wasn’t just “being naughty”; he didn’t know any more than me how to change this.

He seemed interested in the solar system at one point, so I got a book from the library and left it lying on the table. Showing an interest myself, suggesting we Google it, watch a program, or choose a book from the library, would have ensured he never mentioned it again and refused to take part. He found the book himself and was delighted, saying: “Look what I found! Can we read it?”


“In a minute, I’m busy,” I said, rejoicing. If I’d enthusiastically sat down to read, he would have walked away. When he asked again, I sighed and said, “Ok, but I’ve only got five minutes.” We read for an hour. He was engaged and interested and I was over the moon. A couple of days later, I left another book on the sofa.

“I know what you’re doing,” he said. “It’s a bit of a coincidence, isn’t it, that I asked you about the planets and now these books keep turning up. I’m not stupid. I’m not reading it.” He was six. That was how long that strategy lasted!

More than anything else, he’s taught me how to forgive myself, over and over again, because parenting him has often looked like bad parenting. Rules don’t work. Routines don’t work. What he’s demanded of me is constant change, fluidity, and, more than anything, realness—a trust in him that he’ll figure it out.

I have so much love and respect for him, because if it’s been hard work for me, how much harder has it been for him? Like many children with a particular ASD profile, he’s always done well in school because he’s acting a part. He’s learned the script and plays his part so well nobody sees him. The demands which activate his anxiety are only those which are most obligatory—those from me, and from his own body. As he’s grown older, demands from me are mercifully fewer, but his own body is still his worst enemy.

The art of drawing the line

Where I draw the line is where the resistance is. He knows this, and he knows that I move the line, and he searches for where the line really is and shifts his resistance. My line is: I want him to wash. I don’t care if it’s a bath or a shower, but I want him to be clean. Sometimes. If my true line is a wash every other day, the line I draw is that he must have a bath every day. He’ll fight me, and sometimes I’ll give in, and sometimes he’ll have a shower.

But it’s not a strategy or a method that I’m using. He needs me to hold that line, and he needs me to hold it with everything I have. When I give up and say: “Ok, not today, but tomorrow you really must,” with no fuss, I have to be truly at my end. I have to be close to tears, on my edge of rage. If I tell him that a shower every other day is fine as long as you just do it without any drama, this is the day the line shifts and the resistance shifts. That’s the day he starts putting the shower on without getting in, dampening his towel, wetting his hair in the sink, pouring shower gel down the plug hole, putting his clean pants in the wash and putting yesterday’s back on.

It’s not a strategy because it’s real, and because it’s real, it works. He demands that I meet him in his darkest places, where the pressure is so intense it can break you. He needs me to hold that line while he pushes it with all he has. He needs to know that this thing that won’t let him do what he wants to do, which might be stronger than he is, is not stronger than I am. 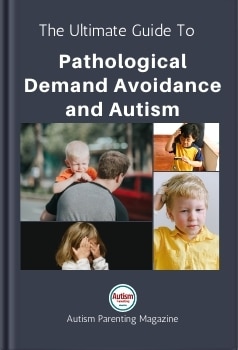 He loves the woods and the river. Outside, he can relax and I feel him expand into the space available. If I leave food as a picnic, he can eat without resistance—drifting in, taking food, and wandering off. If I lie on the riverbank reading with his book beside me, he’ll come and read with me. He will fight me to tears every single time I try to make him go outside.

Parenting my cornflour boy is remembering that it’s an alliance. I’m not fighting him; I’m fighting a part of him, and he’s fighting it too. He wants things to be easy, and when we find a moment of flow and fun together, he’s as glad and relieved as I am. He’s 15 now, and this alliance can be more explicit. Asking questions is a demand and never works, but sharing something of me means we can meet in realness, as we always have.

“I can’t write this thing,” I say to him. “I want to write it, I need to write it, but I can’t sit down and start it.” “Try telling yourself you have to write it with a pen,” he says. “Get angry about that, then you’ll be able to write it on the laptop.” I can see, not all the time but in moments like this, that he’s parenting himself now. During those years of secret alliance, I was building and supporting that part of him that is able to let things be easy. The part of him that was always on my side, that was rooting for us to win. The part that was desperate and lost, that wanted to eat food and wash and go outside, has grown and learned how to manage that other part.

That PDA part is still there—the child who wants so desperately to be good that he can’t try, in case he’s not good enough. The child part who kicks against the boundaries, who throws his whole weight against me to make me keep him safe. He’s managing that himself now, and my hope is he’s able to do that with kindness because I was. My hope is the times I let him see my anger or my tears, the moments when I couldn’t do it, are balanced by the times I held those lines for him with strength and compassion, so he can do that for himself now and in the future.

Read More
3574
SHARES
Share on FacebookShare on TwitterShare on Pinterest
We use cookies on our website to customize our marketing and give you the most relevant experience by remembering your preferences and repeat visits. By clicking “Accept”, you consent to the use of ALL the cookies. However you may visit Cookie Settings to provide a controlled consent.
Cookie settingsACCEPT
Manage consent