Understanding the Gifts of Autism Can Be Wonderful for Us All

I have been working almost exclusively with children on the spectrum for the last 14 years of my 40-year career as a pediatric occupational therapist.  Part of my job is to help identify which children fit the criteria of someone with autism. 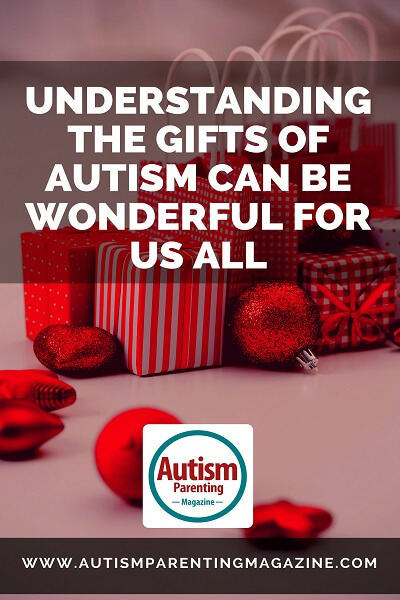 Although no two children are alike, and children with autism are no exception, the syndrome has a few obvious red flags that can be anywhere from mild to profound.  These trademarks have to do with their lack of interest or inability to be socially engaged and to communicate, their need for order and consistency and their sensory sensitivities.

At first, my goal as a therapist was to “fix” them, to increase their social awareness, to integrate their sensory system, to encourage language and make them more like everyone else.

But as the years passed and the number of children enlarged, my awareness also grew. I still see ways to be helpful but now I see the many gifts of autism and how people on the spectrum serve an important role just the way they are; in fact, precisely the way they are.

The first way has to do with their love of the computer. Although many children love screen time, it is often common for a child on the spectrum to be particularly quick on finding his/her way around a computer. It’s not unusual for therapists and parents to use “computer time” as an incentive; the reward given after their children do a required task. It’s called the “If…Then” technique. If you do this, Then you can do this. For some children it’s toys or treats, for children on the spectrum it is almost always the iPad.

This makes me think of people whose job is working for long hours on their computers in small cubicles with limited time for social interaction. Many kids on the spectrum would love that job! Innovative ideas, analysis computation, data compiling can come out of people willing to spend hours focused on their computer. We need people with these skills and many people on the spectrum who prefer order and consistency naturally have them.

I’ve noticed that children diagnosed with autism are often more skilled at noticing details from a very early age. Children I have worked within Head Start Pre-school Centers are almost consistently ahead of the curve on their ability to know colors and shapes and to identify letters and numbers. Their social skills are often underactive but not their academic ones. This makes it difficult when they go on to elementary school and teachers may not have the time to individualize their lesson and they are being taught something they already know. It’s frustrating to go over and over something already known when novelty and intellectual stimulation are what’s needed. Boredom leading to behavior problems is understandable.

Some people diagnosed with autism are faulted because they aren’t noticing what others feel and there is truth to having some difficulty reading body language and verbal cues. But I can see that as a good thing! What I see is that they are NOT people pleasers.  As someone who grew up with the conditioning that nothing was more important than being popular and getting people to like you, I envy their disregard for my opinion. Doing their own thing has a higher priority than doing my thing.  We could all gain from learning to be a little less concerned about people pleasing and more concerned about zeroing in on what is interesting to our own unique self.

Many of the adults who have the Asperger’s form of autism call themselves “Aspies” and there is an Aspie Pride Movement.  Aspies are typically extremely well-versed in subjects we might think of as esoteric.  I know a kid who knew everything there was to know about elephants in Africa and it turns out there’s a lot. Albert Einstein, Wolfgang Amadeus Mozart and Lewis Carroll are thought to have been “Aspies.” I can imagine the highly intelligent and esoteric conversations Aspies must have and suspect they see us non-Aspies as less fortunate.  Just as deaf people using animated sign language with expressive facial features may pity the often flat deliveries of the rest of us.

I read about some of the computer “games” Aspies play and have no clue what they are talking about. But they do and there are people all over the world who do. Maybe there are people with autism who don’t socialize like we are used to, but they can have elaborate interactions with like-minded people.

People with autism make a major contribution to what I see as the lesson of our Time: Accepting Diversity.  Diversity, we are learning, is not something to be tolerated but rather appreciated and even celebrated.  We needed a Stephen Hawking, the physicist; before we got it that someone with cerebral palsy who has difficulty with speech can be brilliant. Prejudices about the color of our skin, our sexual orientation, and cultural and religious differences are being outlawed and many young people are growing up with this accepting awareness. It may seem that little by little, we are making gains in our acceptance but actually, there has been a huge change since the 50’s when I grew up where people of color and women had limited rights and gays were shunned.

Now the contributions by minorities of all types are gaining recognition, including an acknowledgment that their contributions are often reflections of the very aspect that makes them different. Google “famous people with autism” and the list is filled with people who have revolutionized our lives.  In this present age of diversity, we are at last learning that different is not less than but just different.  Successful people with autism help round out this awareness. Eventually accepting diversity will extend to include even the quirks and differences of the people in our own families!

Instead of pitying the mom whose child with autism is having a meltdown in the grocery store, we could instead have an appreciation for their sensitivities. We aren’t noticing, like they are, the overwhelming aspects of the store: the bright lights, the product packaging screaming to grab our attention, the overwhelming choices, the smells from the deli, the squeaky wheels of a passing cart, etc. These aspects affect us all and put many of us into sensory overload and in a bad mood.  We might instead put the blame on waiting too long in the checkout line—which is annoying too—and not put the awareness on the overwhelming situation that we put ourselves in. People who are listening to the information from their sensory system can have problems fitting into our society. But maybe that is a problem in society that we need to recognize.

In no way do I want to lessen the awareness of the challenges of raising a child with sensitivities, I more want to emphasize a larger awareness that their sensitivities bring to our understanding. In a world full of common sensory pollution such as the ear splitting noise of leaf blowers and noxious smell of diesel fumes, we need to be aware of what’s too much before we can change it.

There is a place for autism in our world, a valid, worthwhile, important place. We need to see the beneficial aspect of the differences and see that these children and adults deserve an equal amount of respect. It’s our work to strengthen weaker areas, just as we should for all people, but also to accommodate differences. For example, as a therapist, I have learned that if I want these smart children to be social with their classmates, the best way is to encourage playfulness. It’s not unusual for me to find that the child who seems to prefer his own company will enthusiastically join a fun group game. Engaging these lovely children in play show them that being with others can be wonderful too.

Just like understanding the significant gifts of autism in today’s world can be wonderful for us all.

Barbara Sher is the author of 11 books on playing games. Her latest books, Everyday Games for Sensory Processing Disorder, Early Intervention and The Whole Spectrum of Social, Motor and Sensory Games emphasize playful activities to do with siblings at home and in inclusive classroom using recycled materials. Check out online bookstores or www.gameslady.com for details and to hear Playful Parent podcasts