Inspiring Boy “Breaks” Through Autism and its Stereotypes

As a parent of a child diagnosed on the autism spectrum, I can certainly relate to those instant pangs of fear one immediately begins to digest when the word “autistic” is thrown at you. Will he ever be able to hold down a job? Will he ever be able to find his soul mate and get married? Will he be able to live on his own? A flood of questions ran through my head once the myriad of tests were completed and the diagnosis came through. 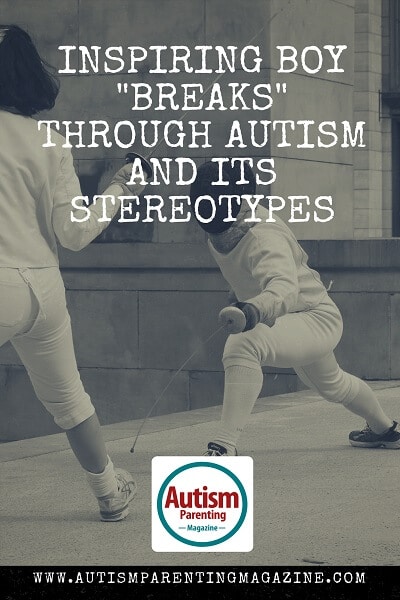 My son, Ethan, was three when he was diagnosed and despite the signs others had noticed, I had done a pretty good job of chalking up those signs to the statement I had heard all too often that the range of “normal” with milestone progressions in infants and toddlers is pretty wide and he would eventually catch up. But after several of my friends and relatives had urged me to have him tested, and finally our pediatrician agreed, I made the appointment and our new journey began.

Ethan didn’t walk until he was almost two, but he could crawl like a demon! He could say almost any word at the age of one but they were never his own, he would simply repeat what others said to him.  He seemed fascinated with any mechanical movement around him and would stare at things like ceiling fans for hours. And doing things like brushing his teeth and cutting his hair was a lesson in how to try and not feel like an abusive parent because the screams were blood curdling when trying to perform these seemingly simple but necessary functions.

Like many autistic kids, he seemed brilliant, even gifted, in some areas, and woefully behind in others.  While he could build highly sophisticated mobile mechanical robots that could walk and jump, he couldn’t tell the difference between girls and boys at three years old.  What was intuitive to him was definitely not intuitive to other three years olds and even today isn’t.  He is as literal as the day is long and context is very hard for him to understand.

Using analogies, innuendo, and sarcasm is often lost on Ethan and as a result, I often act as an interpreter when he is working with a new coach or teacher.  He has had to learn what everyday phrases mean in a different way because of how he interprets communication so he often has to be given an explanation when you would use a common phrase like “It’s raining cats and dogs outside,” and that it means it’s raining very hard, otherwise he will simply look at you like you are crazy because there are no dogs or cats falling from the sky. He has to be taught the phrase, and what it means in the context of a specific situation so that if he ever comes in contact with the same phrase while experiencing a similar situation in the future, he might recognize the phrase and successfully remember what it means.

At least the diagnosis gave me the knowledge that what we were experiencing was not unusual. And doctors and therapists assured us that the tools available to help would make a difference and with that we began occupational, speech, and group therapies to aid Ethan in being more comfortable with the environment around him as well as to give him the skills necessary to more effectively communicate. We did this a couple of times a week, every week, for two years and it helped tremendously. Ethan, at five years old, could communicate well with others and could understand and follow most directions and function within a peer group.

We have had to work with Ethan to help him face his fears, anxiety, and ultra sensitivity to many things.  We had to work with the school to help Ethan when they would hold fire drills because he stressed so much over the loud noise. He struggled to be outside for quite a few years because he was so scared of flying insects.

The list of issues and struggles can go on and on but he has slowly improved with the help of weekly therapy and his family and friends.  He can be outside now, but he does try and stay away from where there are a lot of bugs. He hates the feel of clothing being tight on his skin so it might take him 15 minutes to tie on his black belt perfectly, before a competition, but we make sure we have enough time for him to get it just right before his ring starts.

Having a coach help stretch him, to Ethan, feels like his skin might rip off but we have learned how to communicate to the coaches the areas they can put their hands to stretch him so he doesn’t become too stressed. We sometimes have to re-explain to Ethan what is meant by another person in a way that will make sense to him, because he doesn’t always understand what they mean. But he’s good about asking questions and he has high aspirations to accomplish a lot and is willing to work hard at most everything which helps us make progress all the time.

But as a mom, it hurt terribly seeing that my beloved son, while doing decently well in school, really didn’t have any friends, never talked about kids in his class, had no birthday invitations other than from close family, and pretty much just stayed in his room most of the time building things out of K’nex or making origami. I think every mom wants to think their kids are enjoyed and liked at school and has friends to enjoy good times and memories with.

Since he wasn’t getting much practice interacting with peers nor was he getting a lot of exercise, I decided to enroll him in a local martial arts school. He was not at all enthusiastic about that decision but once he got there, found it a lot of fun and the instructors were very encouraging. He actually loved it.

Ethan had quite an affinity for the sport and he was excited to go back and learn more. It helped that Ethan seemed to have a talent for it because many of the kids in his class wanted to engage him in conversation and make friends. They liked it when he would show off his skills and they would cheer him on.  The sport helped him build self confidence, gain more coordination, start to learn how to communicate and relate to a peer group, and learn how to show respect to others.  He had to learn how to better deal with uncomfortable stimuli, which still isn’t easy for him, though he can now cope much better.

His talent got him noticed and his instructors encouraged us to have Ethan begin competing which also helped him learn a lot of new and valuable lessons. Despite the fact that he began to win on a national and even world level, he has had to learn how to set goals, what it takes to achieve them, he’s learned an amazing work ethic, and he’s learned that life isn’t always fair.

Ethan began karate when he was seven and now, at 12 years old, has accomplished a lot in a short period of time. He just earned the rank of 2nd degree black belt recommended in the ATA (American Taekwondo Association), he is currently ranked in the Top 5 in the world in many events within the two martial arts leagues he competes in and finally accomplished a huge goal of winning a world championship title by defending his #1 world ranking in XMA forms (Extreme Martial Arts) and taking the gold medal in that event in 2016 at the ATA World Championships in July.

He also took 2nd in the world in XMA weapons in that same event.  One of his new goals is to win multiple championships in one year and he can do that in December of 2016 when he competes for another world championship title in several events in the National Black Belt league (NBL) at their SuperGrands event held in North Carolina for all of the top ranked NBL competitors.

He has had a number of other amazing opportunities fall his way through his hard work and talent including a performance on Season 2 of the International show SuperKids which is filmed in Munich, Germany. He has travelled across the country competing and making new friends whenever he goes all while working to stay on the honor roll at the Middle School he attends. One of his other goals in life is to be able to teach others more about that which he has a huge passion for and since he isn’t old enough to teach martial arts or origami to others in schools, he makes tutorials on this subject matter on his YouTube channel.

You can see more of his quest to earn a world title, some of his performances, and just generally see more of who Ethan Fineshriber really is on his Facebook page or Instagram account @ethanfineshriber. And I can tell you now when I watch my little guy, I no longer worry about him being able to be a productive member of society. And despite the fact that most who meet him would never guess he is autistic, a little time spent around him tends to reveal those markers that will likely always be present.

I am one of the proudest mothers on the planet and I take heart in knowing that while Ethan will still always struggle with some things and will always be a little quirky in some ways, he sincerely has the world at his feet and I now know full well will be able to pick and choose what he most wants to achieve because he has had some amazing tools to help him grow and has the willpower and fortitude needed to achieve anything he can dream of.  And for that, I am beyond grateful.

Read More
214
SHARES
Share on FacebookShare on TwitterShare on Pinterest
We use cookies on our website to customize our marketing and give you the most relevant experience by remembering your preferences and repeat visits. By clicking “Accept”, you consent to the use of ALL the cookies. However you may visit Cookie Settings to provide a controlled consent.
Cookie settingsACCEPT
Manage consent