Is Autism Really Underestimated in Women?

Girls With Autism Flying Under the Radar proclaims one headline. For many years, it’s been accepted the wisdom that there’s an approximately 4:1 ratio of autistic men to autistic women. Recently, self-advocates, scientists, and clinicians have challenged this long-accepted ratio. They claim autism presents differently in girls. As a male on the autism spectrum, I have read several articles on the subject with interest. 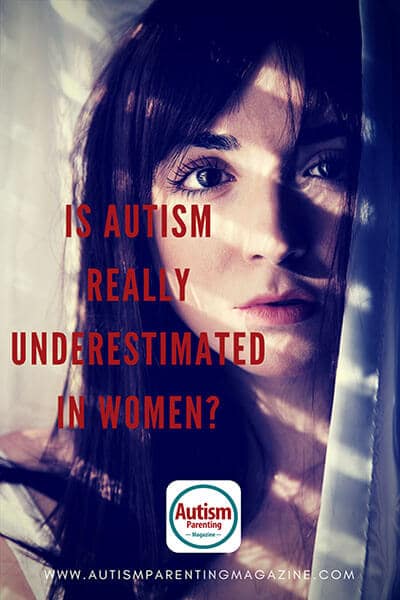 A popular explanation for the gender disparities is a phenomenon called camouflaging.  Its proponents claim mildly autistic women are better at disguising their symptoms than their male counterparts.  They copy the behavior of non-autistic women.  Therefore, they’re either less likely to be evaluated by a clinician. One piece of evidence for this hypothesis is the male/female ratio of those more severely afflicted is 2:1, but the ratio is more like 6:1 or greater for more mildly impaired individuals.

Some individuals have claimed a lower male to female ratio is a fact rather than a hypothesis. The proponents of this idea believe if  women were adequately assessed and diagnosed, the sex ratio could be 2:1 or lower. Are they correct?

A few published studies claim to support this idea. Dworzynski and colleagues conducted a study comparing boys and girls who had high autistic traits.  Some didn’t merit an autism diagnosis while others did. Among this high-trait group, they found more boys received a diagnosis than girls (56% versus 38%). The diagnosed girls had more pronounced behavioral issues than the diagnosed boys, i.e., more hyperactivity, social problems, anxiety, acting out, as well as lower average IQs. The girls who had autistic traits, but were not considered impaired enough to merit a diagnosis, had greater communication difficulties but less social impairments compared to the non-diagnosed traited boys. This suggests the possibility of higher level in social abilities among some girls cause them to be missed by a clinician.

In a published report by Sarah Bargiela and colleagues, 14  women who received a late diagnosis of autism spectrum disorder (ASD) were interviewed. These individuals reported they learned to camouflage their autism by mimicking other girls’ behavior, and reading about characters in novels and emulating that behavior.  Though they were able to fit in at school, they had problems at home. Some of them reported they were so adept at camouflage and mimicking the behavior of neurotypical people, they were skeptical they had an ASD. However, they had problems with anxiety, depression, and eating disorders.  When they consulted professionals, these individuals did not note how these could be related to autism. Some of these women asked professionals if they had an ASD, but these concerns were dismissed, or they were misdiagnosed.

Another study done by Meng-Chaun  Lai and colleagues attempted to quantify differences in camouflaging between autistic men and women. They developed a camouflage measurement based on external behaviors evaluated on the Autism Diagnosis Observation Scale, versus internalized behaviors assessed with subjective surveys.  They found autistic girls, on average, had significantly better ability to camouflage their autism.

A study done by Allison Ratto and colleagues assessed a group of autistic boys and girls and found the females had comparable scores to the males in the Autism Diagnostic Observation Scale as well as the Autism Diagnostic Inventory.  Contrasted with the comparable scores to males on the ADOS and ADI, on The Vineland Adaptive Scale and the Social Responsiveness Scale, two parent-rated measurements, autistic females were found to have lower independent living skills as well as worse communication and adaptive behavior than males.  Based on these results, Ratto et al. hypothesized the reason was females effectively camouflaged their autism, as well as a bias against girls being diagnosed.

One of the problems with this line of thinking is similar ratios are reported in attention-deficit/hyperactivity disorder (ADHD), dyslexia, stuttering, and other developmental disabilities, where the individual would be unable to camouflage their condition.

On scrutiny, there are flaws in the works of Dworzynski,  Bargelia, Lai, and Ratto.  One of the problems with the Dworzynksi study was the instrument used to assess the autistic traits, the CAST (Childhood Autism Spectrum Test, originally Childhood Asperger Spectrum Test) has been found to have limited predictive value, about 50% against clinicians’ consensus diagnosis.

In Bargelia’s paper, the sample of 14 women came from recruitment on the Internet in social media groups frequented by high-functioning autistics or individuals known to the investigators rather than a sample drawn from a clinical group.  At least seven of the women were employed.  Others were parents with children.  A few of them were university students.  This would likely not represent a typical sample of even high-functioning autistic women.  There was no comparable group of males assessed to see if the phenomena of alleged masking and camouflage were unique only to females. No explanations were offered why autistic males would be less motivated or capable of camouflage or masking behaviors.

Their data fail  to explain the large differences in the gender ratios of more severely autistics as opposed to the more mildly impaired individuals.  If anything, Lai’s work argues against camouflage as the reason for the discrepancy in the ratios.


In Ratto’s paper, there is no discussion of why the parents would not have sought a clinical diagnosis for their children when these girls obviously had some sort of problems, and whether or not they were differentially diagnosed as something other than autistic.

Though the average IQ of all the subjects of both sexes was about 101, there was a wide range in the scores (between 71 and 145).  Therefore, at least some of the autistics in the study had an intellectual disability or borderline.  It’s unclear what percentage of these were males and what percentage were females.  It’s possible some of the lower-functioning females contributed to the results. In none of these studies do the authors explain why female autistics would be more adept at masking their disability than males. Is there biologic evidence of a high male-to-female ratio in autism?

Females also have two X chromosomes while males only have one. There are a variety of forms of autism that are X-linked, such as fragile X. The female’s spare copy of the X chromosome may protect her from this effect, but she still might be able to pass it on to her son. This could in part account for the higher ratio of autistic men to autistic women. However, the number of X-linked cases which usually result in intellectual disability would be too small to completely account for the higher ratio in men. It’s also possible that differences in the way male and female brains are structured may give females some protection against autism. Because of this, females may need to have a higher level of genetic mutations than males to acquire autism.

Elise Robinson of Harvard University provides circumstantial evidence of this in one study. She compared boys and girls in a group of opposite-sexed  fraternal twins with autistic traits.  She found when comparing boys and girls who were ranked in the top 10th percentile in these traits, the girls were more likely to have an autistic sibling than the boys. These findings suggest a greater amount of genetic loading may be required for girls to become autistic than in boys.

Research on genetic mutations suggests females need a larger hit of mutations to become autistic.  Sebastien Jacquemont and colleagues found three times as many deleterious mutations in female autistics than in males. This was also the case when they controlled for cognitive abilities of the sexes, suggesting that this was not because the female autistics were more severely affected. They also found higher levels of these mutations in the mothers of the children than the fathers. This data suggests that females have some sort of protective effect, making them less vulnerable to autism.

A study done by Donna Werling and colleagues compared gene expression in male and female brains.  In autistic postmortem tissue versus controls matched for age, they found the genes expressed more commonly in the male brains were also expressed more commonly in autistic versus the non-autistics.  They also studied the brains to see if genes associated with autism were differently distributed in male and female brains. They found this not to be the case. However, they found that genes that are indirectly associated with autism are expressed differently in the male brain versus the female brain, suggesting females require a higher genetic load in order to get autism.

The clinician bias and camouflaging hypotheses have led to a push by some activists to create an entirely different definition and diagnostic criteria of autism for women. They claim undiagnosed women with autism are not getting the supports they need. What these supports are and how they would help women over the age of 21 who can no longer receive public special education services is unclear.

Persons born in the late 1980s and later are eligible to be assessed by a clinician, paid by their school district if the parents suspect autism.  If there are helpful supports they can receive, and it can be proved that autism presents differently in women, then they should receive these services.
Studies on camouflaging and other explanations of why female autism rates could be higher than reported are still new. More time is needed to assess this research to see if there’s any empirical evidence to support these claims. To date, there appears to be none.  In the meantime, it’s not helpful to claim these theories are established fact.

Read More
600
SHARES
Share on FacebookShare on TwitterShare on Pinterest
We use cookies on our website to customize our marketing and give you the most relevant experience by remembering your preferences and repeat visits. By clicking “Accept”, you consent to the use of ALL the cookies. However you may visit Cookie Settings to provide a controlled consent.
Cookie settingsACCEPT
Manage consent